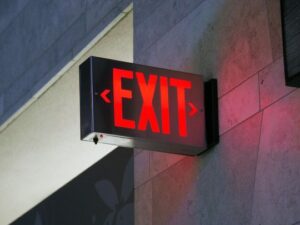 The building Egress System per IBC chapter 10 is intended to provide quick, and protected escape for all building occupants during an

emergency. Exit Access, exit passageway, and Exit Discharge are the specific parts of the system that weave people out of the building. These pathways flow through building elements, occupancies, and floors, representing another required element during design.

Egress paths through rated partitions require openings, and openings require protection to slow the spread of smoke and fire (IBC 716). In addition, these paths and openings must meet the criteria of accessibility in both the International Building Code and the Americans with Disabilities Act (IBC Section 1009 and Chapter 11, ADA 404). The challenge is weaving all these aspects of the code into a functional, aesthetically pleasing space, that is also egress-able for all.

In this update, we will explore egress options available on fire and smoke rated opening protectives as they relate to the IBC and ADA requirements for egress. 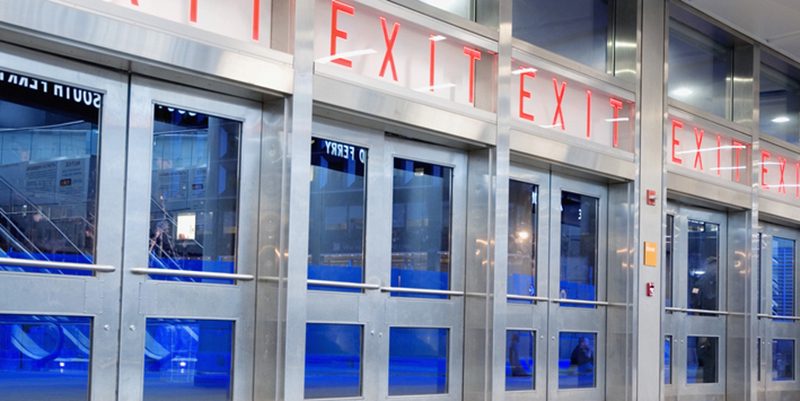 In order to illustrate the options, we need to first unpack the requirements for egress in general. Both the IBC and ADA classify a broad list of requirements all egress doors should meet. Subsequent sections focus on the specific door types available and their nuanced requirements based on how they operate. 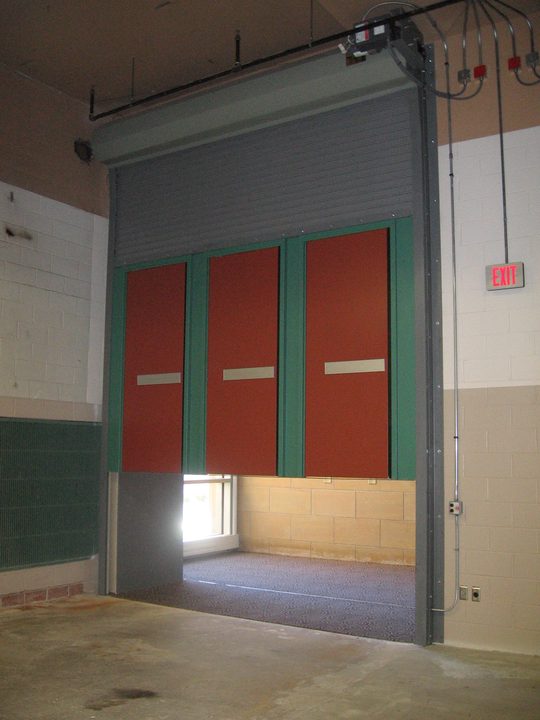 The IBC begins their requirements focused on the most common egress door type, the swing door. Knowledge of the code requirements for this egress door type are well proliferated. For the sake of time, we will focus here on a few specific items that transfer into the more specialize options available in opening protectives:

Following the charging language, there are numerous clarifications offered that allow for narrower clear open dimensions based on occupancy or type (i.e. residential dwelling units, walk-in freezer doors, saunas, toilet stalls, etc) that we also will not spend a-lot of time on since those conditions do not typically occur where we are locating opening protectives in egress paths. 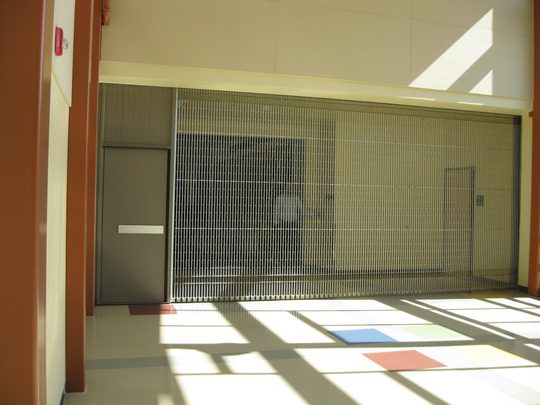 No Special Knowledge, No Grasping

Both the IBC and ADA requirements for hardware stipulate a usable, one-handed method of opening doors to ensure accessibility. The devices are to not require grasping, pinching or twisting of the wrist, and only require 5 lbs of force to activate (IBC 1010.1.9.1, ADA 309.4). 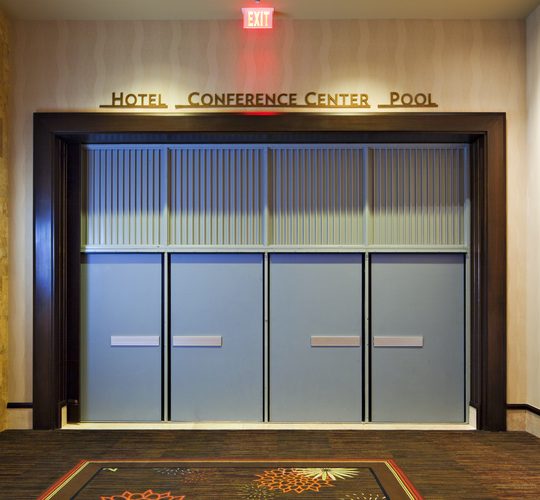 Further, the IBC declares egress doors shall be, “readily openable from the egress side without the use of a key or special knowledge or effort.” (IBC 1010.1.9). The term “special knowledge” is open to interpretation and left up to the local jurisdictions to determine when an egress option crosses that line. In general, the intent is to ensure any potential building occupant understands how to escape in an emergency, without having to sacrifice escape time to figure out how to open an egress door. 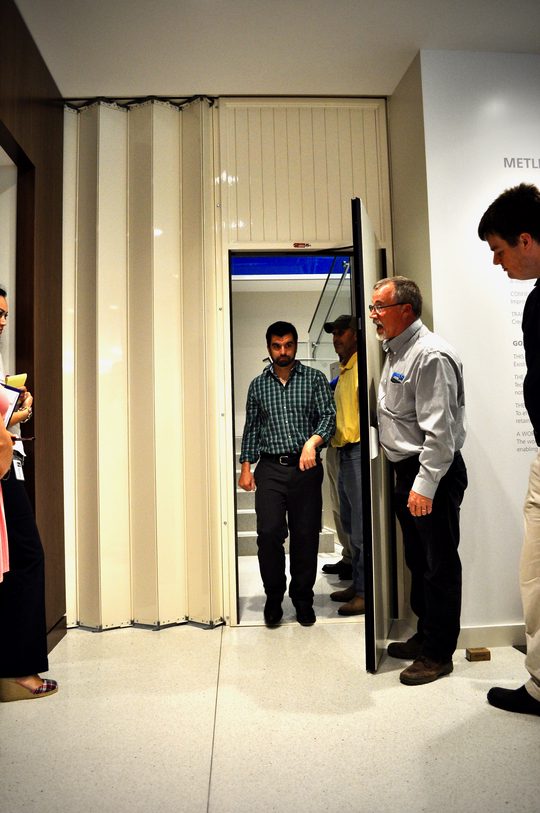 Thresholds are an important feature for egress doors. They ensure the clear operating space described previously is not interrupted by an obstruction across the bottom of the opening. Both the IBC and ADA rules state the maximum height of a threshold under the opening is 1/2”. The intent is to keep the height below a level that a wheel chair could roll across, and prevent a tripping hazard for the visually impaired. The ADA rules do clarify you are able to have an extra 1/4” of height (3/4” total maximum) if beveled edges are used around the threshold with a slope no steeper than 1:2. 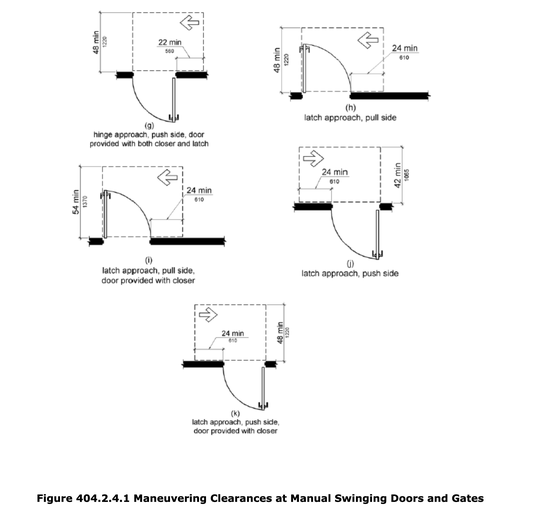 The key element to focus on for our discussion here: the intent of any egress door is for it to be navigable by all building occupants, including those protected under the Americans with Disabilities Act. 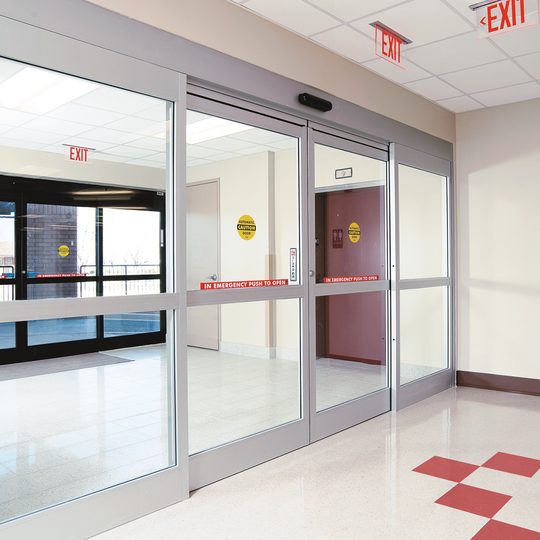 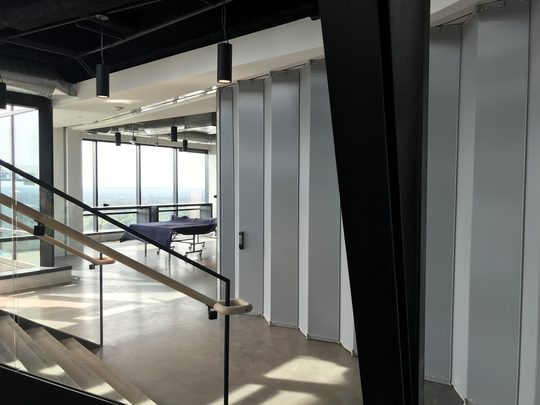 So far, we have discussed the rules for using Swing Doors as a path for egress. Horizontally acting doors can also provide egress via special operating rules that pertain to reversing the door itself, or opening break away doors. 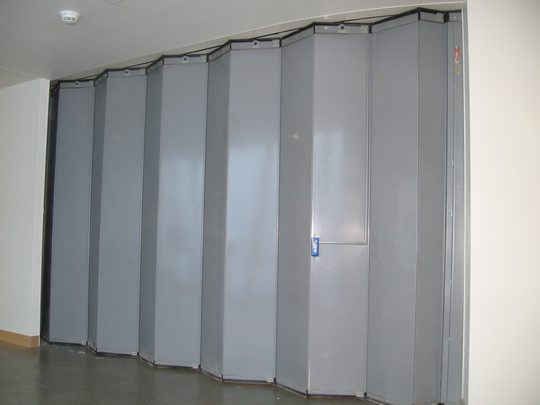 The items above referenced a minimum width: ADA defines this in 404.3.1 as being 32” minimum in both power-on and power-off mode. ADA also requires similar maneuverability spacing to swing doors, with openings designed around horizontally acting products.

The final nuance in the ADA’s egress requirements for Horizontally Acting Doors with egress is all focused on the specifics of activation and entrapment protection. ADA 404.3 references that the Automatic doors and gates comply with ANSI/BHMA A156.10 and A156.19. For our purposes, they focus on activation “zones” (156-9.1.5.1, 7.4.3, 8.2.3) and safety “zones” (9.1.5) that define where the egress feature is activated from. Specifically, it is within 24” from the face of the door and be effective within 5” of each side of the door opening. Specifically they are looking at motion sensors (A156-8.0) that detect a minimum height person of 28” moving at a rate of 6” per second.

As a note, none of the Automatic Power and Power-Assisted doors with egress mentioned in ADA, ANSI/BHMA, or the IBC describe a vertically acting powered egress option. Products with a vertically retracting egress option will likely be evaluated via an alternate means and methods format since they are not directly addressed in the building code. 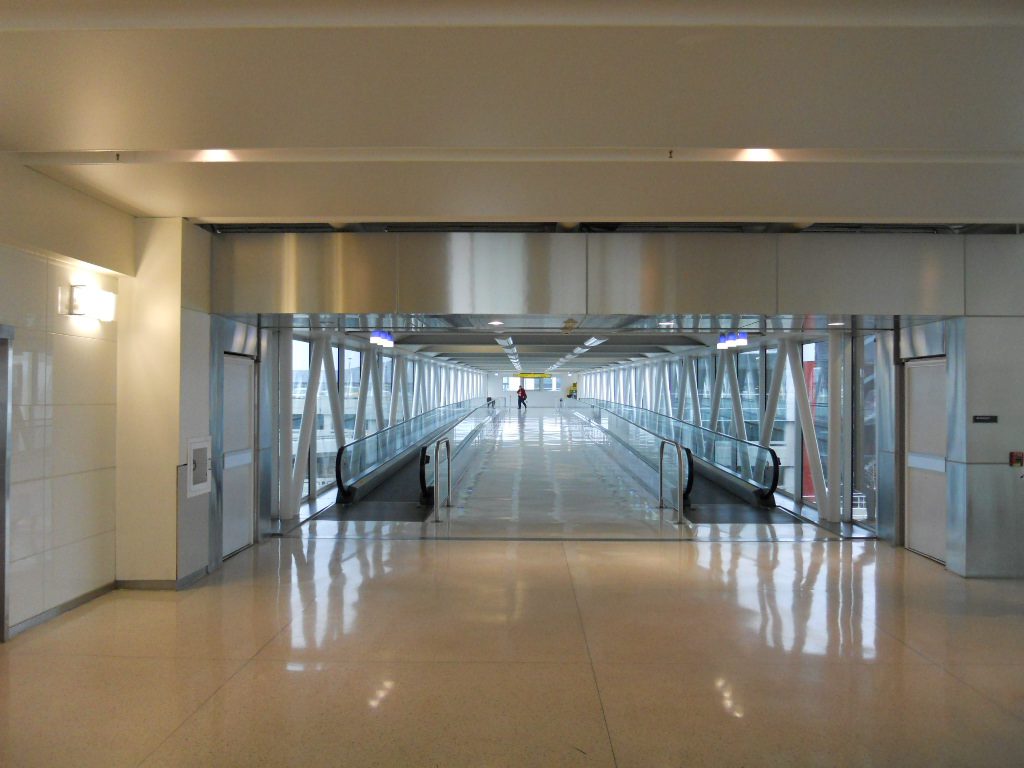 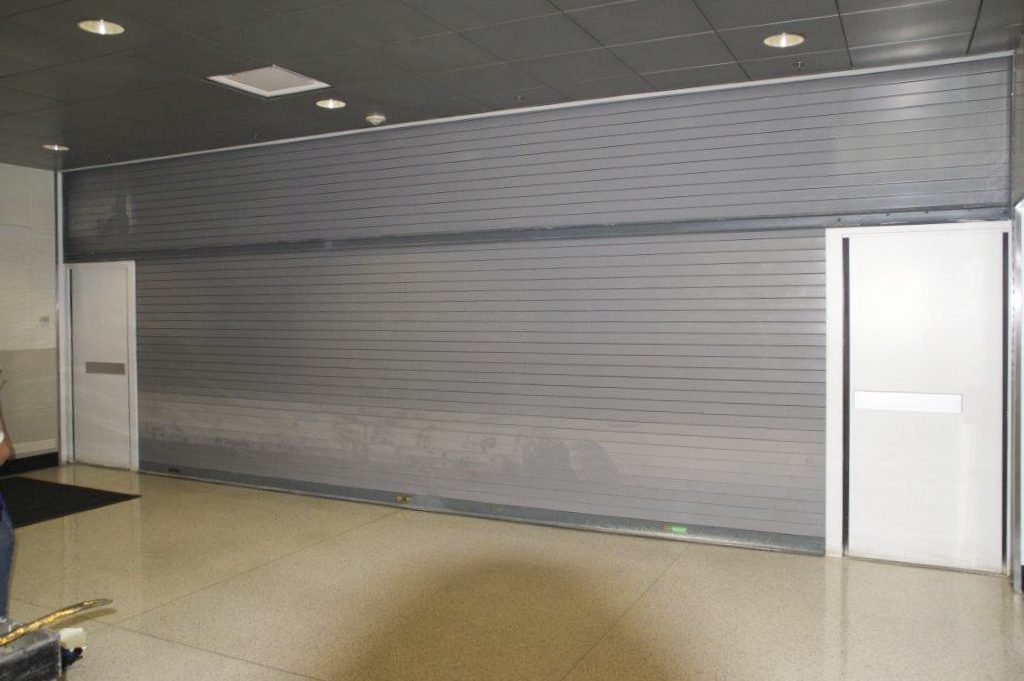 Circling back to the original dilemma: how do we design the egress system, while also contend with building code requirements for occupancy separation, conjoining structures, vertical connection, smoke compartments, among other reasons for rated partitions and walls? Swing doors on fire walls are definitely the simplest method, however limiting that choice may be to the look and feel of the building. Wide span opening protectives with egress features will help to expand product options for protected openings, and ultimately allow for a more flexible design. 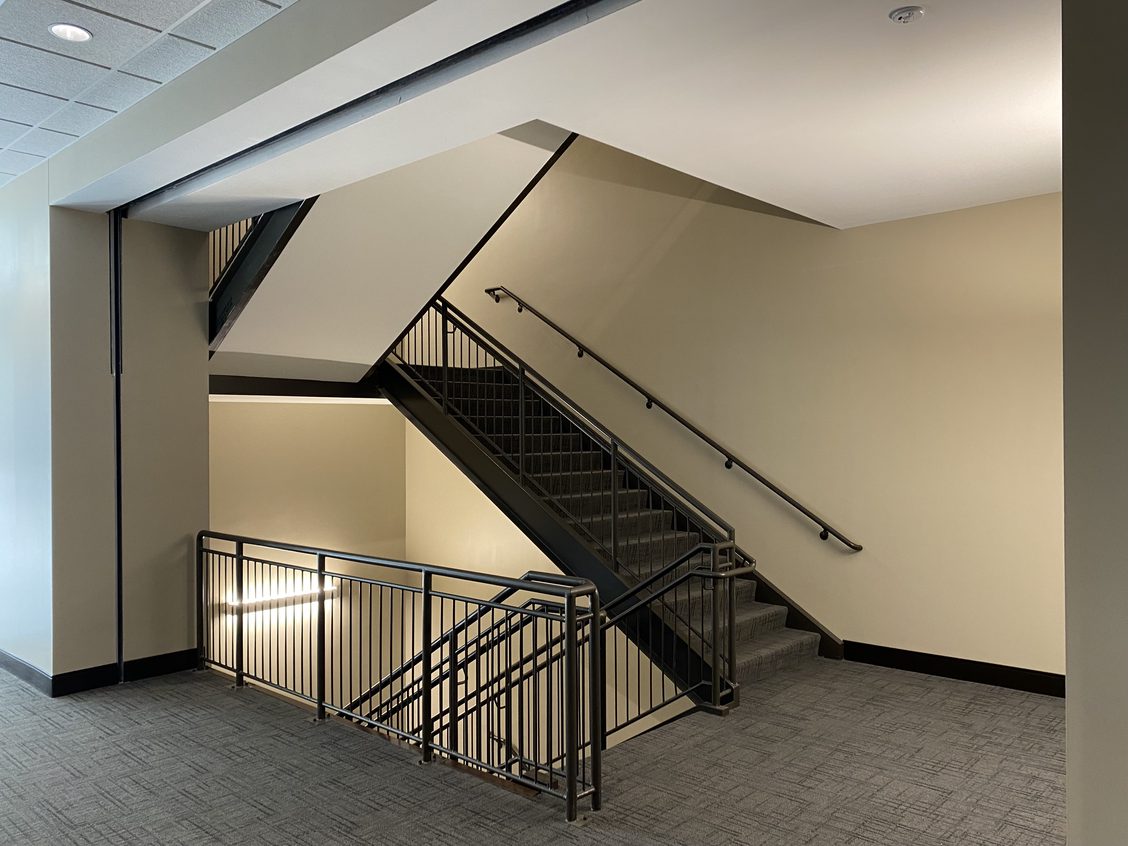 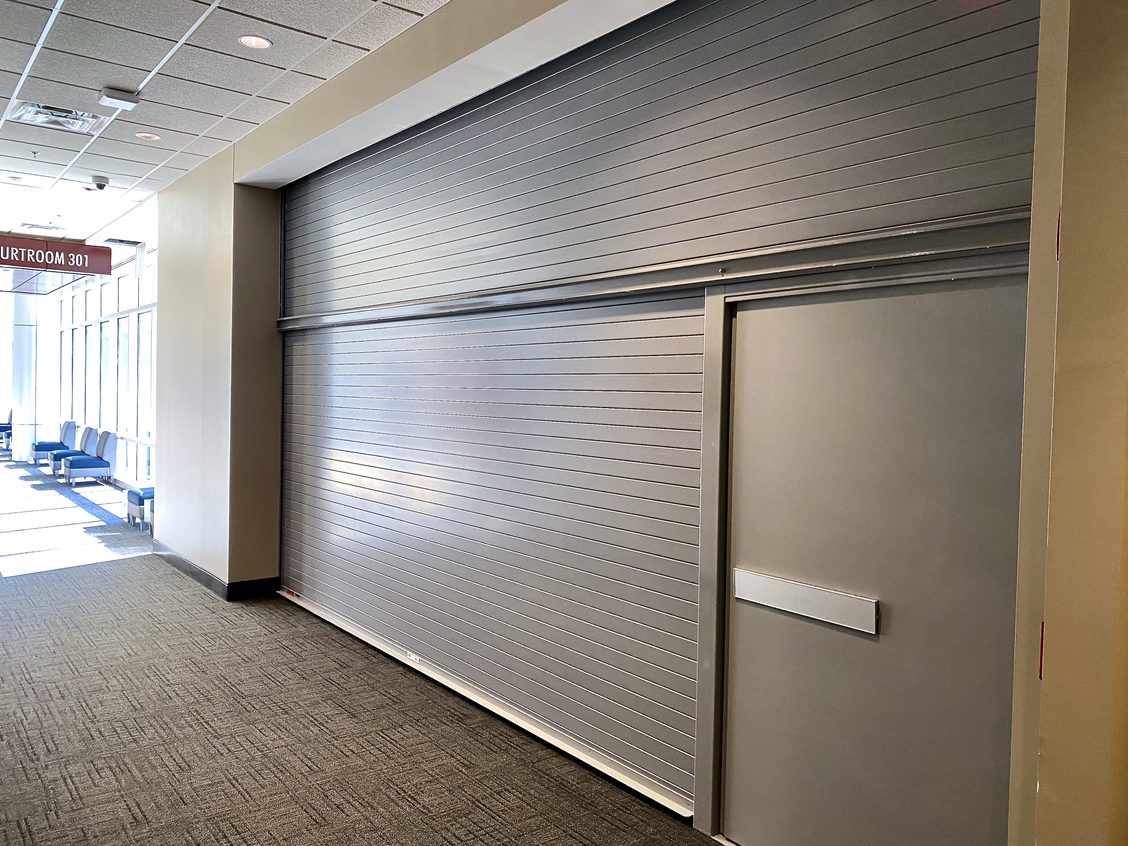 A fire door with a full egress door built in is the least nuanced way of achieving egress through a rated door. As we walked through before, the swing door is the most widely known egress option, with the least amount extra rules to follow. Consequently, swing doors also have the least amount of “special knowledge” required with a panic bar being the widely known activation method for the door. If we could define a “plan A” egress method, this would be it. 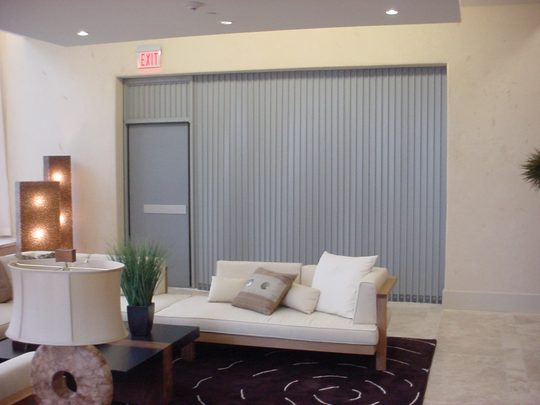 Fire doors with built in swing doors do require additional pocket space (if horizontally acting), plenum clearance (if vertically lifting), or wall space (if folding the swing door into hold open). As we have reviewed, the building code does provide a path for using powered egress on side acting fire/smoke rated doors. For our products, egress paddles serve as the activation method on each side of the fire door. Once pressed, the door retracts the required minimum 32” gap, pauses, and closes after waiting a design time for someone to egress. 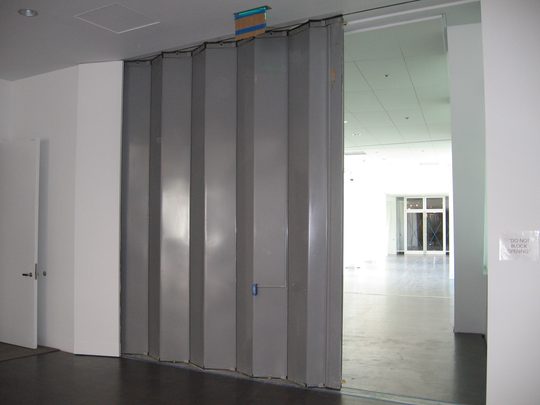 Specifically, let’s focus in on Smoke Rated Fabric Curtains, due to the fact that there is not a UL10B rated fabric fire curtain with egress available on the market today. Only UL10D rated curtains with egress are available. 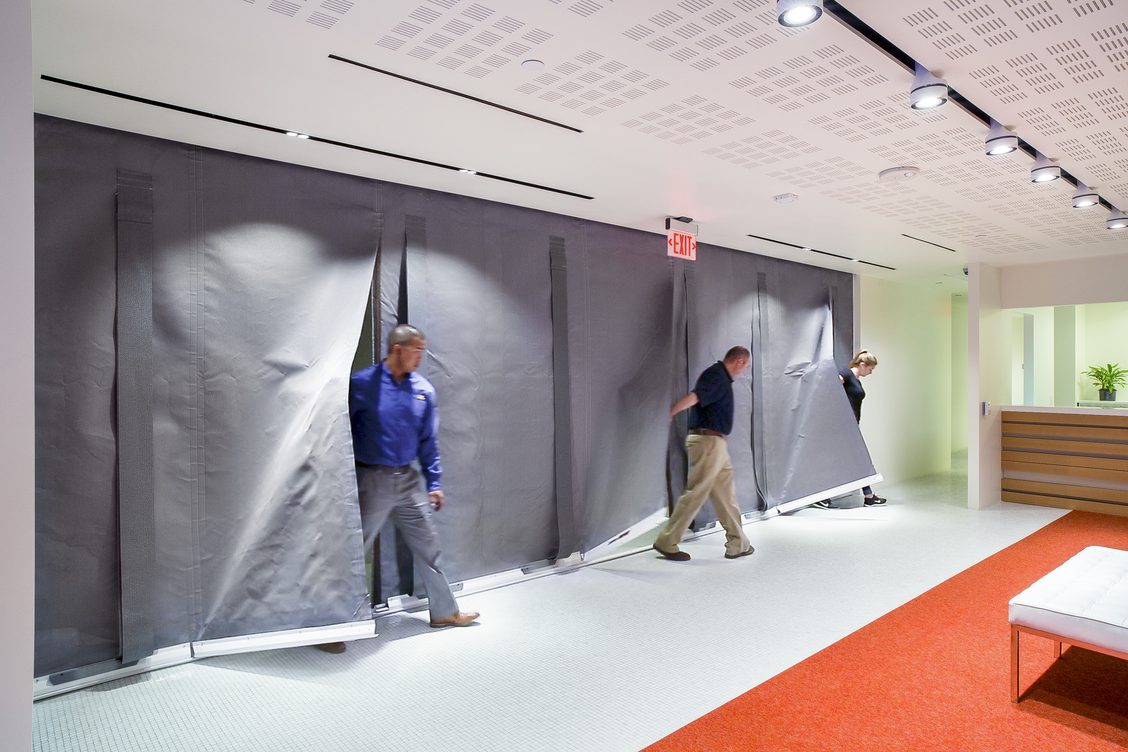 The complication is IBC 2018 does not recognize the UL10D test criteria at all, and in the 2021 version of the IBC, UL10D will define as a 20 minute fire rating maximum. Per IBC 710.3, Smoke Partitions are the only partition type not required to have at least 1 hour fire resistance rating (the next closest are Smoke Partitions and Fire Partitions, each requiring 1 hour fire resistance rating per 708.3 and 709.3). As a result, using fabric fire rated curtains with egress is a limited endeavor until a UL10B rated curtain with egress is introduced.

One key item on fabric curtains with egress: pay close attention to the method of egress provided. Especially concerning the clear requirements for thresholds, clear minimum openings widths and heights, and maneuverability – not all products that claim ADA alignment meet the criteria defined in the ADA requirements! Some products will have a continuous bottom bar, without maintaining the threshold maximum height or clear opening requirements the full height and width of the egress opening. Others will use vertically acting powered buttons that require special knowledge and a wait time longer than 10 seconds for the curtain to raise out of the egress path (not to mention ADA and IBC codes do not describe with a vertically retracting egress feature). 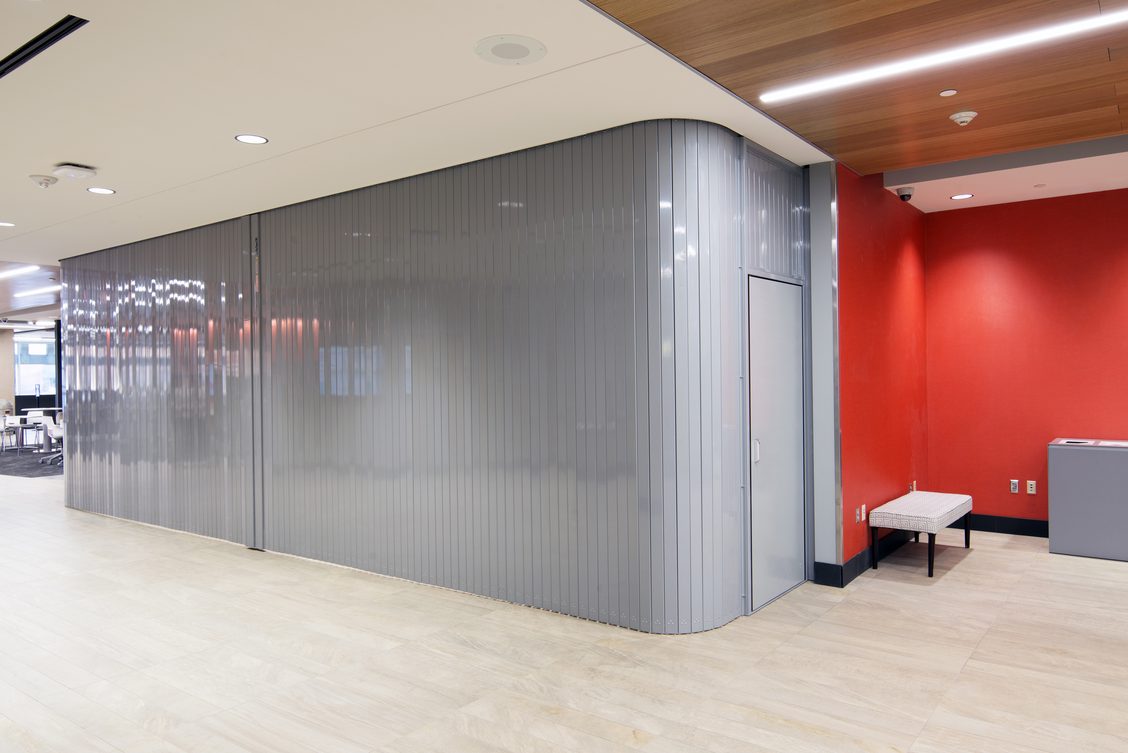 In closing, we at Maxson and Associates are always willing and ready to work through and try to help solve design challenges created by opening protectives and egress paths. If you feel stuck, we likely have a solution that can help!

Back to Latest News