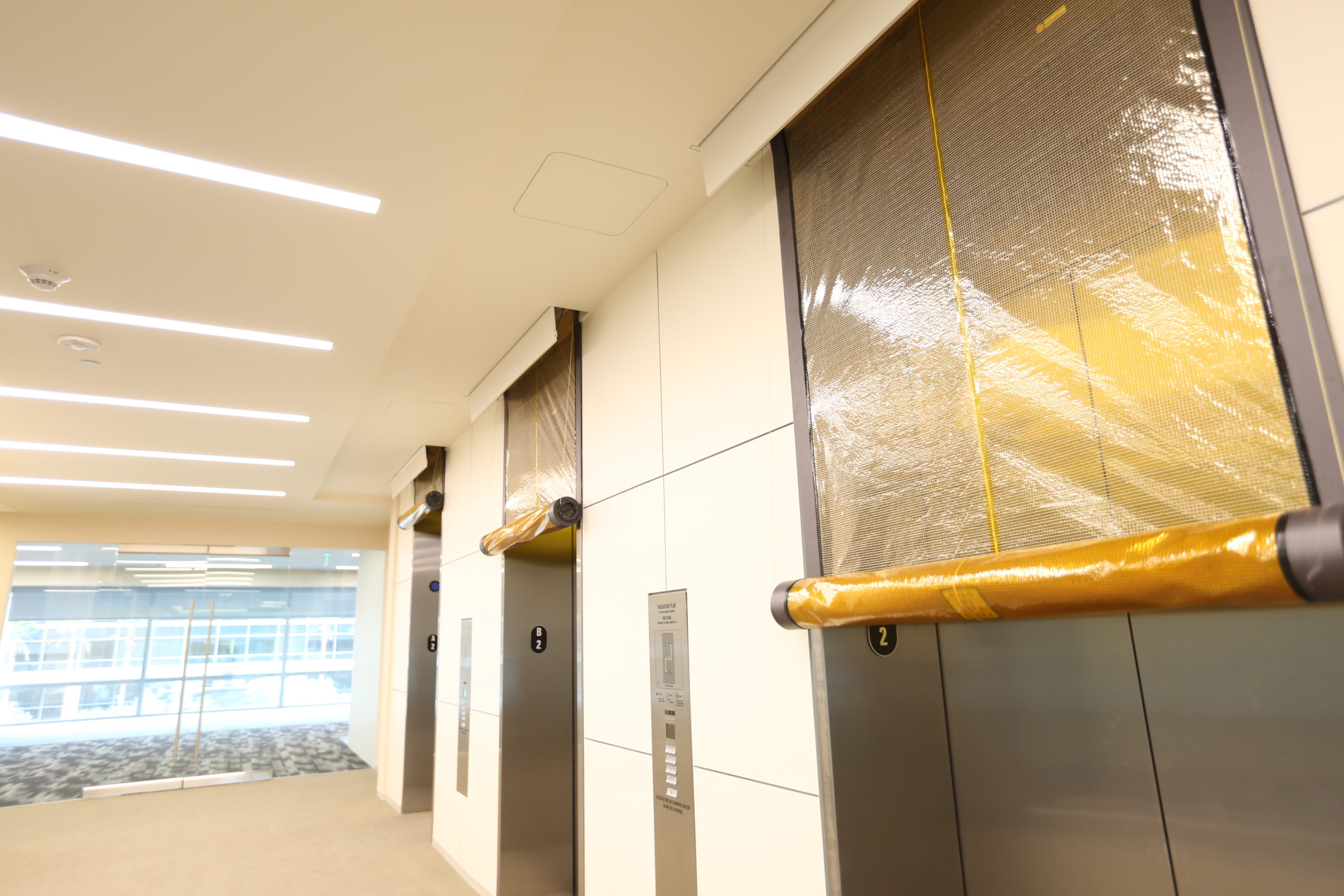 Elevators serve as a convenient travel option between vertical floors under normal conditions, however in a building emergency they serve a much more specific role per the International Building Code.  Chapter 10 under section 1003.7 limits elevators to only be used as an “accessible means of egress in accordance with section 1009.4”.  As a result, the IBC and ADA Guidelines prescribe specific guidelines that the elevator has to follow, and because Elevator Smoke Protective Curtains, like Smoke Guard, cover and protect the opening of these accessible means of egress, care should be taken understanding the differences in the curtains used in this application.  One additional note: the direction of egress we are discussing is only exiting from the elevator in the event someone was stuck inside.  NOT ingress into the elevator for clarification.

To apply the requirement further: Section 1009.1 states that any accessible spaces “shall be provided with not less than one accessible means of egress.”  With all buildings being scoped under Section 1103.1 as being required to  be accessible to individuals with disabilities, elevator cab spaces under alarm, even if they are not the designated vertical path to a public way described in section 1009.2.5, should provide adequate accessible egress.   The American Disabilities Act confirms this as well in designating Elevators as an “accessible route” under 402.2.

All elevator smoke protectives, whether an encasing lobby with swing doors or a smoke curtain, are required to activate upon the detection of smoke.   Most smoke curtains available in the industry are able to reopen through powered/motor opening, with either a screen mounted button, or a button installed onto the elevator frame.

The issue with the “button installed on the frame option” is ASME A17.1 requires that any alteration to a rated elevator frame be tested under the same fire testing process as the base frame, and since these buttons are from a third party curtain manufacturer and not the elevator company, they are not tested and certified to be used together.  As a result, the installation of the button would void the elevator frame’s fire label since it represents a field modification of a lab tested product.

In addition, Section 3002.6 of the 2015 IBC states that “Doors other than the hoistway doors and elevator car doors, shall be prohibited at the point of access to the elevator door unless they are readily openable from the car side without a  key, tool, knowledge or effort”.  How would someone confronted with this activation button possess the knowledge necessary to know that it is even a button at all much less a means to activate the curtain?

Nevertheless, units are required to provide a method of manual egress to allow escape IN ALL CIRCUMSTANCES.  Section 1010.1.4.2 states “where means of egress doos are operated or assisted by power, the design shall be such that in the event of power failure, the door is capable of being opened manually to permit means of egress travel or closed where necessary to safeguard means of egress.”

Further with this safeguard, egress would not be dependent on battery backups that may or may not still be functional due to an owner not changing out the batteries as the manufacturer recommends.  Egress would not be dependent on an exterior generator providing backup power.  Failsafe operation should be possible if we are blocking an egress path.

Three of the manufacturers who build this type of product have developed a manual/non-powered mode of egress.  Keep in mind the intent is for accessible egress; wheel chair traveling individuals, people without arms/legs, would certainly fit into this need.

Smoke Guard’s magnets push away from the frame allowing egress from standing or rolling in a wheel chair.

One alternative manufacturers may require that the person egressing bend over and lift the bottom bar off the floor, raise the curtain over their head and pass under the bottom bar before it closes again via gravity.  Would this truly in line with the American Disabilities Act?  Could a person in a wheel chair successfully pass through this system?  What if they were panicking and ran into the screen?

Soft bottom bars are also a safe guard against an egressing elevator occupant who may not make it out of the way before a powered egress unit comes back down.  What would happen to this individual if a weighted, steel bottom bar descending quickly landed on their head?

The intent of all life safety products is to allow for a safe and quick evacuation from a building, either protecting egress, buying time for egress, or allowing egress.  Paying careful attention to product components on these life safety opening protectives ensures that ALL building occupants, whether walking, rolling, or on crutches are able to safely escape.

Back to Latest News